The Divine Anus of Salvador Dalí.

"[Lorca] was homosexual, as everyone knows, and madly in love with me. He tried to screw me twice. I was extremely annoyed, because I wasn’t homosexual, and I wasn’t interested in giving in. Besides, it hurts. So nothing came of it. But I felt awfully flattered vis-à-vis the prestige. Deep down I felt that he was a great poet and that I owe him a tiny bit of the Divine Dalí's asshole. He eventually bagged a young girl, and she replaced me in the sacrifice. Failing to get me to put my ass at his disposal, he swore that the girl’s sacrifice was matched by his own: it was the first time he had ever slept with a woman." - Salvador Dalí

When beholding the Great Masturbator which Dalí painted in 1929 around the time he met Gala it is worth noting that as a young man he flicked through his father's book of explicit photos of the "advanced effects" of untreated venereal diseases. The photos of grotesquely damaged diseased genitalia fascinated and horrified young Salvador, and he continued to associate sex with putrefaction and decay into his adulthood. He later pinned his "impotence" on his father, as well as his mother, and naturally Dalí went on to fantasise of sodomising his dying father. This also might explain the direct kind of gynophobia Dalí later developed. It has been suggested that he was molested by a teacher who used to have Dalí sit on his lap while he stroked him. That would explain the artist’s lifelong hatred of being touched. The subject of twelve of his early paintings was Dalí's sister Ana Maria, a number of which tellingly depict her from the rear, which has led some to conclude that the relationship between them may have been incestuous. The sex life of Salvador Dalí was not a common one to say the least.

When he was 18 Salvador Dalí met Luis Buñuel and Frederico Garcia Lorca, who was 23 at the time, both of them weaved odes to one another into their work. Dalí and Buñuel lived to mourn the death of Lorca at the hands of Fascists in the Spanish Civil War, later Dalí betrayed Buñuel. For Dalí the obsession with Lorca would last a life time. At 25 Dalí was still a virgin (in heterosexual terms) when he met Gala and she was a sexually adventurous 35 year-old looking for a way out of a relationship. Gala had been married to Paul Éluard, it was a marriage characterised by free love as a rule and possessiveness as taboo. The old conventions and repressive traditions were washed away for this lot. Group sex was high up on the menu so Gala and Paul would often share their bed with Max Ernst. When Lorca got the news of Dalí's new found love he said "It’s impossible! He can only get an erection when someone sticks a finger in his ass." The two were together for 53 years, Gala filled the roles of a muse, a business manager and a lover.

The relationship between them was hardly a faithful monogamy that lasted over half a century, throughout there were staged orgies and plenty of "gifts" for youthful lovers. Gala kept a castle for a summer retreat to which Dalí could only visit if invited by letter and there in the piano room Jeff Fenholt would play music in the middle of the night. The rockstar was in his twenties at the time and Gala was in her seventies, the "gifts" to him included several paintings and a million-dollar home. Fenholt is now one of those vultures which we might describe as right-wing televangelists. For $6,000 Dalí had bought a castle in Púbol in '69 that would serve as a fuck-nest rather than a love-nest. There was plenty of drama at the house of Salvador Dalí, in 1980 Gala attempted to poison him with a dangerous cocktail of medicine that badly damaged his nerve system. Some believe it was an attempt to kill him. When Gala died in 1982 Salvador first attempted to induce suspended animation by deliberately depriving himself of fluids, it was possibly the first of two suicide attempts. Dalí had to be rescued from a blazing fire that he started in his bedroom at the castle.

Mind you Dalí had his own indulgences, candaulism for one. He developed a penchant for persuading youths to drop their trousers and masturbate as he watched. He hoarded thousands of photos with many different lads. There has been a long speculation over the exact sexuality of the exhibitionist painter. We might be able to trace the misogynistic, or more accurately gynophobic, tendencies of Dalinian art down to Dalí's fear of a particular part of the female anatomy. To put it more bluntly, Salvador Dalí was a self-professed worshiper of the female posterior. The extent of this obsession drew the concern of his fellow Surrealists, he denied he was coprophagic one minute and in the next instance would state "true love would be to eat one’s partner’s excrement." Perhaps we should keep in mind that the Catalonians are a very scatological people, for it is custom before eating to exclaim "Eat well, shit hard." The specific preference he had was for hermaphrodites, which he never encountered and only ever fantasised about. Not masculine or feminine, androgyne was the order of the day. 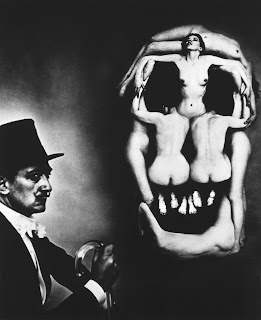 It doesn't end there. Rumour has it that Salvador Dalí financed the sex-change operation for the man who is now known as Amanda Lear. After he divulged this rumour  Mark Fisher went on to write:


"The Sadean imagination quickly reaches its limits when confronted with the limited number of orifices the organism has available for penetration. But the Masochist - and Newton is in this respect, as in so many others, a Masochist through and through, as is Ballard - distributes libido across the whole scene. The erotic is to be located in all the components of the machine, whether liveware - the soft pressure of flesh - or dead animal pelt - the fur coat - or technical. Masochism is cyberotics, precisely because it recognizes no distinction between the animate and inanimate. After all, when you run your fingers through your beloved's hair, you are caressing something dead."

Originally the art served as a vent for the eccentricities, fetishes and obsessions that lurked beneath the surface of a shy Catalonian boy. But as he crafted a persona through which he could express these same things with almost the same level of impunity, then the standard of his art went into a steep decline in his later years. The sexual ambiguity, explicit paraphilia and vivid androgyny found so exuberant in Dalinian artwork in tones which drew the approval of Sigmund Freud. These were supposedly liberated from the subconscious and onto the canvas through his paranoiac-critical method. The 20th Century leitmotifs of sex and paranoia are conjoined twins in Dalí's work where we find he anticipated the psychic crises out of which came our paradise and in which lurks uncertain jouissance for the living to discover. We find some of the worst nightmares of the 20th Century conjured up by the more sinister works he churned out, while the juxtaposition with sex introduces a sadomasochistic element into the situations portrayed. That in itself carries a hidden truth of the many horrors of the 20th Century, the functions and dysfunctions of the libido.
Posted by Unknown