The Price of Haitian Liberty. 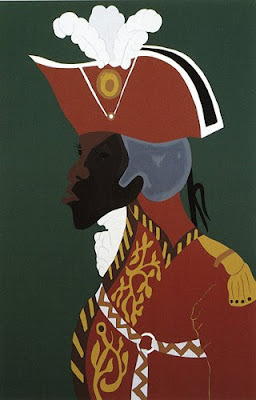 Liberté, égalité, fraternité.
Pat Robertson recently claimed that the earthquake Haiti suffered was for the best, because it will lead to greater development and change in Haiti. The prominent Christian fundamentalist also claimed that the earthquake was a result of a Faustian pact, made between by the Haitian revolutionaries in order to liberate their country from the French. The implication being that chattel slavery was a practice blessed by God which only the Devil could undo. Robertson pointed to the consistent pattern of tragedy and failure in Haiti as evidence for a "curse" as a consequence of such a pact. It is unsurprising that this came from a man who once agreed with Jerry Falwell that 9/11 was the fault of the ACLU, as well as lesbians and abortionists, and later called for the assassination of Hugo Chavez. Despite all of this, his statement reflect a general attitude in the Western media. In the media, Haiti is often discussed as if it is cursed, the earthquake is just one of many tragedies to strike the island over the last two centuries. But the country's history, which tells a quite different story, is rarely explored for the sake of public consumption.
The Republic of Haiti may seem an insignificant country in 2010, the economy is in tatters and society has been decimated by crime, the political system is corrupt and often resorts to violence to get it's way. Too many people have forgotten Haiti was the first independent Black Republic. A nation-state which had been liberated by slaves from white supremacy, in a revolution based on the same ideals espoused by French revolutionaries - liberté, égalité, fraternité. The Revolution that began in 1791, and with the leadership of Toussaint L'Ouverture, had snatched Hispaniola from the hands of the wealthy colonialists and slave-masters by 1804. The goal was to turn the island into an autonomous state of free and equal citizens, working together for the good of society, that would not be exploited. Unfortunately, after over 200 years of political turmoil, Haiti is now branded a "failed state" by the hegemons of the United States and Europe. The accomplishments of the Haitian revolutionaries were undermined by a series of dictators, but external forces hold some responsibility, to say the least, for the "difficulties" Haiti has endured.

The "Curse" of Black Jacobinism.
In using the sword against their oppressors, the slaves of Haiti had "become" Jefferson's universal human beings. Despite this, the colonial powers did not just accept Haiti as a sovereign nation equal to their own. The Vatican avoided signing a concordat with the first Black Republic until 1860. The American government refused to even recognise Haiti until 1862. The French soon punished the Haitians for deposing their masters. The former slaves had to compensate their former masters, and in the end Haiti had to pay 150 million francs - the equivalent of $21 billion - in reparations to French slave-masters. This in itself is an appalling perversity. The Haitians had to pay to avoid an embargo, the same kind which the US imposed on Cuba after the fall of Batista. In 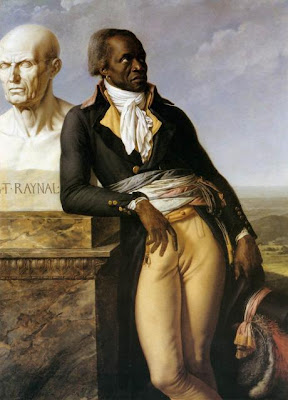 order to repay such an enormous "debt", Haiti had to lend money from banks in France, Germany and America. The aim of all this was to destroy the positive example of Revolutionary Haiti and crush the spirits of slaves everywhere. By 1900 Haiti was spending 80% of its national budget on repayments. The US first "intervened" militarily in Haiti in 1915, occupying and effectively ruling the country until 1934. During the American occupation, revolts by the people were crushed with extreme force and several politicians were executed or exiled from the island. The colonialists were successful in their wish to destroy the "contagious" example that Haiti might have become. Finally, in 1947 Haiti had managed to pay off 60% of the "debt". Over the next nine years, Haiti was plagued by instability, disasters both natural and man-made, the theft of relief funds and military coups. It was in 1956, that a new leader, who would leave Haiti sinking with debt and dead bodies, was elected.

In 1956, Francois "Papa Doc" Duvalier took office as the President of Haiti. He would rule for 15 years, leaving thousands dead and the country driven further into ruin. Duvalier had been elected on a black nationalist platform, characterised by populist rhetoric against the mulatto elite. The Haitian state itself was always effectively dominated by powerful elites, the 200 years since the Revolution has not changed that. The country has a long history of despotic regimes going right back to the Revolution. The most horrific and infamous of which was the Duvalier regime, under which a kleptocratic family dominated Haiti for 30 years. This brutal dictatorship sustained itself through violent repression, using a oprichnik-like militia known as the Tonton Macoutes to terrorise the masses - to not just crush opposition, but to crush the possibility of an opposition.

"Papa Doc" Duvalier formed the Tonton Macoutes in reaction to a coup attempt in the late 1950s, when he had yet to consolidate his power. Duvalier immediately exploited the rift between Cuba and the US, beginning in the late 50s. The populist rhetoric targeting Haiti's mulatto elite, which "Papa Doc" had ran on, concealed a reactionary agenda. The Duvaliers were explicitly anti-communist, the subject of political repression among the poor were suspected communists. Haitians who had an education were the immediate subject of suspicion; this led to the Haitian brain drain which the country has yet to recover from. By 1969, Duvalier had introduced the death penalty for the crime of "communist activities". Officially, the US government opposed the Duvaliers, but in practice they supported the dictatorship all the way because of their vehement anti-communism. By the time of his death in 1971, Francois Duvalier had supplanted members of the elite, who were "disappeared" or forced to emigrate, with loyal supporters of his family. His son, Jean-Claude Duvalier, a.k.a. "Baby Doc", would rule the country until 1986. 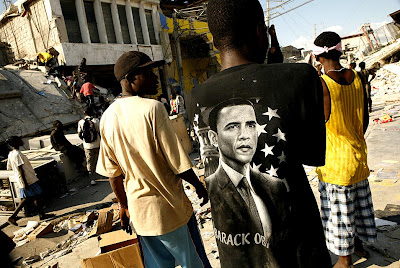 The Crisis and The Change.
In the words of Milton Friedman: "Only a crisis, real or perceived, produces real change." This is the logic currently at work in Haiti. A crisis offers opportunities, for the United States, to reshape the Haitian government and economy. The earthquake that has devastated Haiti is the worst to hit the island in nearly two centuries. The IMF did not waste time and quickly seized the opportunity, in a matter of days, to push through a loan of $100 million. Though, such hefty amounts of funds are needed in Haiti but the country is already heavily in debt. This loan also came with conditions, such as raising prices for electricity, refusing pay increases to all public employees except those making minimum wage and keeping inflation low. This is just an old story on a new day, the IMF took advantage of the devastation, and the trauma inflicted upon the people, to push through further neoliberal reforms.

This is nothing new to Haiti, or any developing country for that matter. Since the end of Duvalier rule in 1986, the US government, along with the IMF and the World Bank, has continued to interfere with Haiti's political and economic system. The democratic election of Jean-Bertrand Aristide in 1991 was soon undone with a military coup backed by the first Bush administration. The IMF proceeded to impose "structural adjustments" on Haiti throughout the 1990s. Haiti's tariffs on rice were soon chiselled down from 35% to 3%, leading to massive rice-dumping from the US. The long-term result of such cuts on tariffs resulted in an increase in dependency on American agribusiness. By 2005, the effects of trade "liberalisation" could be seen in Haiti, three out of every four plates of rice eaten in the country had been produced by agribusiness in the US. There is plenty of money to made from Haiti, sweatshops where Haitians earn less than $2 a day are not uncommon.

These are standard practices, for multinational corporations and politicians, which have been refined since the 1950s. As detailed in the book Confessions of an Economic Hit Man by John Perkins, it is corporations who send "economic hit men" into a country which has resources they covet and arrange a massive loan to that country (through the IMF or the World Bank). The loans end up going to developing infrastructure, which will benefit only a few rich people in that country as well as large corporations. The country is left with a massive debt which cannot be paid off, the "economic hit men" then negotiate to drive down the price of resources, such as oil, which can then be easily bought by corporations. This logic can be pushed further to allow countries like the US to build a military base in the country. But also to force the country to privatise electrical companies, schools, health care and, in the case of Bolivia, even water. The IMF and the World Bank might even offer to "refinance" the country's debt leading to yet more debt, with potentially higher interest rates and more radical "conditions". These "conditions", or structural adjustment policies, vary from currency devaluation, mass privatisation, deregulation and trade liberalisation (like the lowering of tariffs).

The "economic hit men" are not always successful in their pursuit of such goals. When they do fail, the "jackals" are sent in. These individuals are often trained and supported by the NSA or the CIA, they are usually used to overthrow or assassinate politicians who are in the way. During Aristide's second Presidency, began in 2001 and ended "abruptly" in 2004 after he had demanded France pay $21 billion in restitution to Haiti. At that time, the Haitian government had just put $57.4 million towards the state's debtors. The Haitian government had received $39.21 million to spend on education, health-care etc. from foreign assistance. At a time when Haiti was paying back more than it was receiving, when the country was in desperate need of $21 billion, that he was once again overthrown in another coup - this time backed by the second Bush administration through the CIA. If the "jackals" had failed in overthrowing Aristide, the final move may have been a full blown invasion by the US military.

As far as I am aware, $1.2 billion of Haiti's debt has been cancelled thus far. Though, the country still has $900 million in debt, which will be taken up to $1 billion and over by the end of this crisis. Almost half of that debt is owed to the Inter-American Development Bank, to which Haiti is scheduled to pay $10 million next year as part of the repayments. Recently, there has been even more talk of writing off Haiti's remaining debts. The Venezuelan government has written off the $295 million, in oil-related debt, Haiti owes to their country. This is a positive update, but on it's own it is not enough. It is imperative that the structure which has driven Haiti into such debts is changed, for Haitian poverty is down to neoliberal reforms. The structure and these reforms can only be reversed if the IMF and the World Bank are changed radically, which can only be accomplished by bringing about radical change in the West - particularly, the US.