War All the Time. 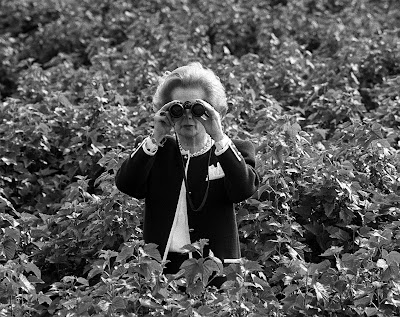 The special place of British troops who fought in the Falklands in this funeral should surprise no one. It was the war that saved Margaret Thatcher in the 1983 General Election, without which the later battles over the mines, privatisation and the poll tax would've never been fought. Since the death of the 'Iron Lady' we have heard little of the truth of Thatcher's foreign policy. Only the snippets have made it through in a collage of sound bites cherry-picked and arranged by the media class as part of the Thatcher hagiography. We're reminded of the Falklands war, as it was her saviour in life, it is now her saviour in death. There has been little to no mention of the full range of Thatcherite foreign policy, only Ireland and South Africa are mentioned as negative examples of the decisions made by the Thatcher government. Little mention of Thatcher's subservience to American power, evident in her decisions to support Reagan's bombing of Libya and Bush's invasion of Panama to kidnap Noriega. No mention of Thatcher's support for violence around the world.
The Falklands was once adequately summarised by Jorge Luis Borges as a "fight between two bald men over a comb." It was hardly a noble stand for democracy against dictatorship, as the Thatcher government was supporting Pinochet at the same time. In fact the Chilean dictatorship was a major ally in the war with Argentina. It's plausible that the Thatcher government would've had little qualm with the Argentine Generals had the islands not been an issue of dispute. That can hardly be called 'principled' in any sense of the word. It was a convenient way to benefit from the nationalist fervour too often stirred by war. In his bid to displace anger over his economic policies Galtieri gave Thatcher the opportunity needed to distract from the economic crisis in Britain. The sons of the poor were sent to fight and die for even less than the islands themselves. For their victory the Thatcher government rewarded the country with a programme of privatisation and deregulation, the consequences of which we are still living with to this day.
A year before the Falklands war was to be waged Margaret Thatcher gave the nod to the KMS to start training and arming the Contras in Nicaragua. It was a part of Washington's policy of stamping out all opposition with death squads. The support for the Contras would later burst out into the open and expose the ugliness under the surface of America's wars for 'liberty' and 'democracy'. The only other foreign policy position that the press have praised has been Thatcher's stance on the invasion of Grenada. Supposedly the 'Iron Lady' was outraged by the operations conducted in a Commonwealth nation without consulting the British. Actually the outrage was rather timid and private, while the UK government stood in line and supported the invasion. It definitely isn't the case that the Thatcherites were making anything more than cold calculated decisions to keep in line with American foreign policy. As we will see, for the most part, Thatcher failed to differentiate herself from the American line on world affairs. 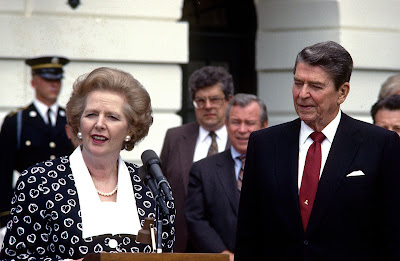 We are meant to look upon Margaret Thatcher as a strident anti-Communist who brought down the Berlin Wall with the Reaganites. Even the words the Communists tried to use against her were turned against them. The term 'Thatcherism' was originally deployed by the Communist Party of Great Britain, while 'Iron Lady' was a sobriquet of Soviet invention; it was Dennis Healey who dubbed her 'Attila the Hen'. Old Madge delighted in all of this. It was the only and best card to play of course. Unsurprisingly then 'Attila the Hen' was quick to attack the Soviet empire upon taking office in 1979. It was one of Thatcher's first acts to persuade the European Economic Community to put a stop to its shipments of food and powdered milk to the children of Vietnam. After that decision a third of all infants under five deteriorated and many were stunted. Perhaps the only journalist to document this in the West was John Pilger. He also kept an eye on Thatcher's support for the enemies of the enemy in a bid to support one dominion over another in the Cold War.
It was not enough that the US war in Indochina had killed maybe more than 3 million people. The children of Vietnam were guilty by virtue of being born into a Communist state that had dared to try and defy the American empire. When the Vietnamese invaded Cambodia and overthrew Pol Pot it was the US - still bitter over its humiliation in Indochina - led the chorus of international condemnation. Quick to follow the Americans as ever the British were soon on the side of Pol Pot. It was a matter of supporting China's influence in the region over that of Russia. The Khmer Rouge claimed to be the legitimate government of Kampuchea, so the US and the UK supported their bid to hold onto their seat in the UN. The West withheld aid to Cambodia until the Vietnamese occupation came to an end. The argument was that the Vietnamese would not let the aid reach the Cambodian people. Meanwhile, Vietnam sent over 25,000 tonnes of food aid across the border to feed civilians.

Instead the US government piled on the pressure for the World Food Programme to send $12 million in food to the Khmer Rouge sitting across the Thai border under UN protection. As Pilger has noted, the US had been secretly funding Pol Pot in exile since January 1980. The extent of this support - $85m from 1980 to 1986 - was later revealed in correspondence to a member of the Senate Foreign Relations Committee. The Major government would admit in 1991 that the UK had provided the Khmer Rouge with SAS training from 1983. It was in a 1988 interview for Blue Peter of all settings that the 'Iron Lady' clarified her view of the Khmer Rouge "Pol Pot could not go back... but some of the Khmer Rouge of course are very different I think there are probably two parts to the Khmer Rouge there are those who supported Pol Pot and then there is a much much more reasonable grouping within that title 'Khmer Rouge'..." This should not shock the cold-eyed realists of the world. 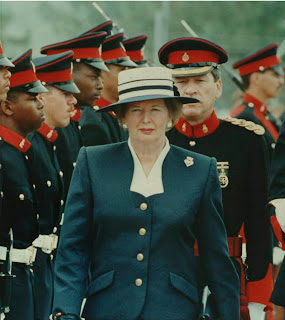 
In the bid to support China mattered more than justice - which was not on the balance sheet of priorities. The deaths of 1.2 million people under Pol Pot were a price worth paying for extending China's reach and rolling back Russian influence. In the surrounding region the Thatcherites were a force of continuity and pledged support for Suharto in Indonesia. This support went as far as arming Suharto's troops to butcher the people of East Timor. The deals were overseen by minister Alan Clark, who had no concern for the consequences of his actions. Again, the justification for America's support for Suharto was to hold-off Communism. Sukarno was too left-ish and had to go, the CIA made sure of that in 1965 with the coup that installed Suharto for the next 33 years. The deaths of 200,000 people in East Timor didn't matter, neither did the deaths of more than a million people in Indonesia itself. It mattered not to Mr Reagan as little as it did to Mrs Thatcher.
This was a policy not contained nor unique to East Asia. It was the Thatcher government which violated Britain's neutrality in the Iran-Iraq war and began to sell as many arms as possible to Saddam in 1981. The American government had yet to remove Iraq from the terrorist list at that time. Once Iraq had been taken off the list (and replaced with Cuba) the Reagan administration threw total support behind Saddam. Before the Reaganites could fully align themselves with Hussein in 1982, Thatcher was sending Christmas cards to not just Saddam Hussein but Colonel Gaddafi. Together the Reaganites and the Thatcherites won over Saddam to the American side of the Cold War. That was before the standing of both Saddam and Gaddafi changed. Over 20 years later, as Jonathan Schwarz noted, the Iron Lady penned this line for an article "Saddam must go... It is clear to anyone willing to face reality that the only reason Saddam took the risk of refusing to submit his activities to U.N. inspectors was that he is exerting every muscle to build WMD."
We're living with the legacy of Thatcherism abroad and not just at home, it is very much alive and kicking. It's not just that we live with privately owned electric companies and a crippled labour movement. It was Thatcher's foreign policy which stands as the extension of the prescription of austerity, privatisation and deregulation. Financialisation and wars of aggression are not as far from one another as it may appear. Both were just as short-sighted as one another. It was the Thatcher-Reagan support for Iraq in its development of weapons of mass-destruction in the 1980s the Iranians reacted by re-opening the nuclear facilities that had been closed with the era of the Shah. We know how this ended for Iraq and we should be alarmed by the ongoing aggression demonstrated by the US and the UK towards Iran. It could all too easily escalate into a full-blown war and we know whose side we shall be on. And for that we may thank the departed.