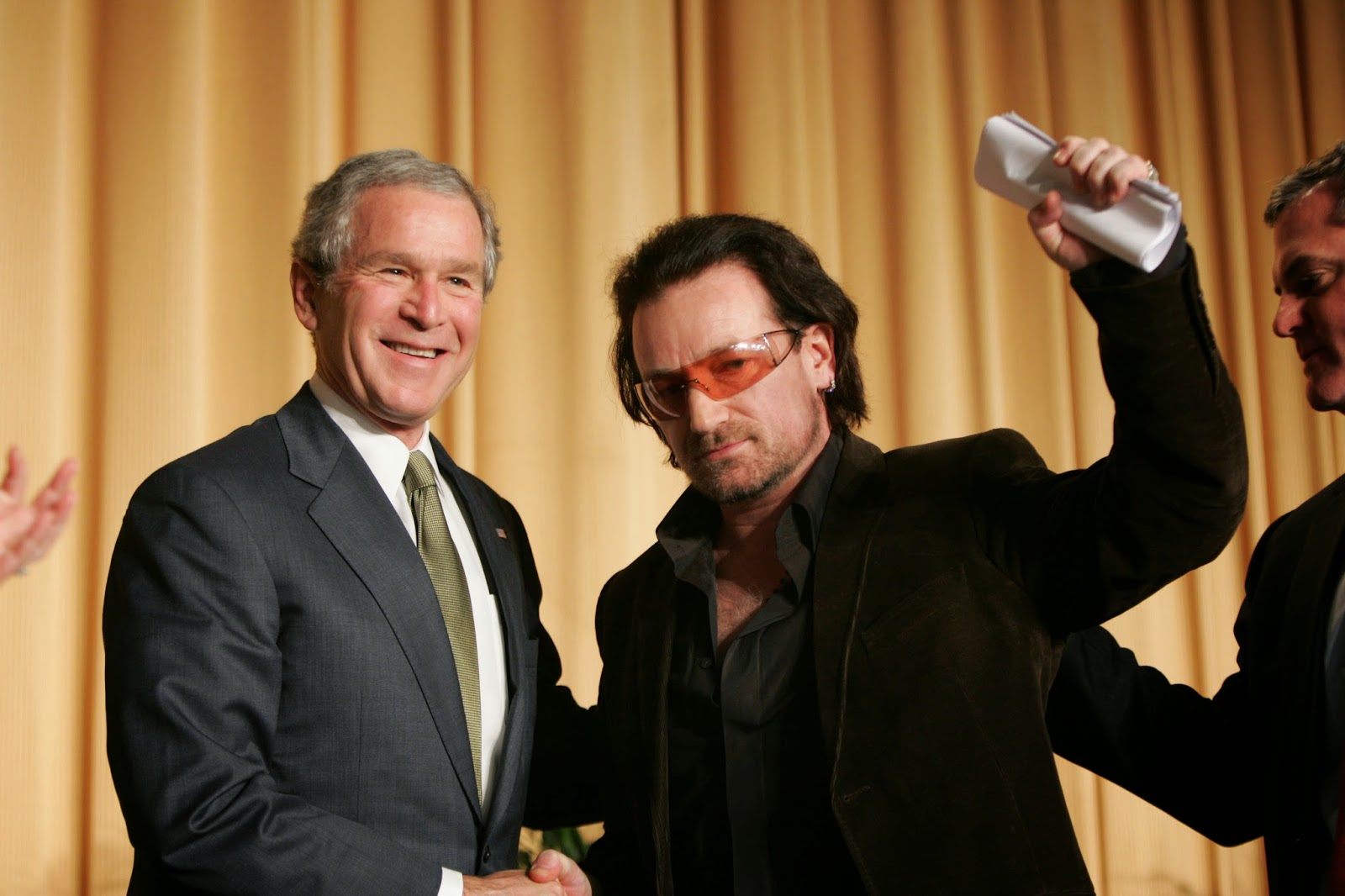 Why should anyone take Bono and Geldof seriously? This is the same pair who, in 2005, claimed that the G7 had wiped away the debts of Africa. As if the West would ever allow that continent to start over. In actuality the G7 had agreed to takeover the repayments of $55 billion (out of Africa's collective debt of $295 billion) to the IMF, the World Bank and the African Development Bank. By the way Africa had already paid $550 billion in repayments from 1970 to 2002. Nearly a decade on and Africa is still weighed down with debt.
Posted by Unknown No comments:

The fourth party is a fourth problem. 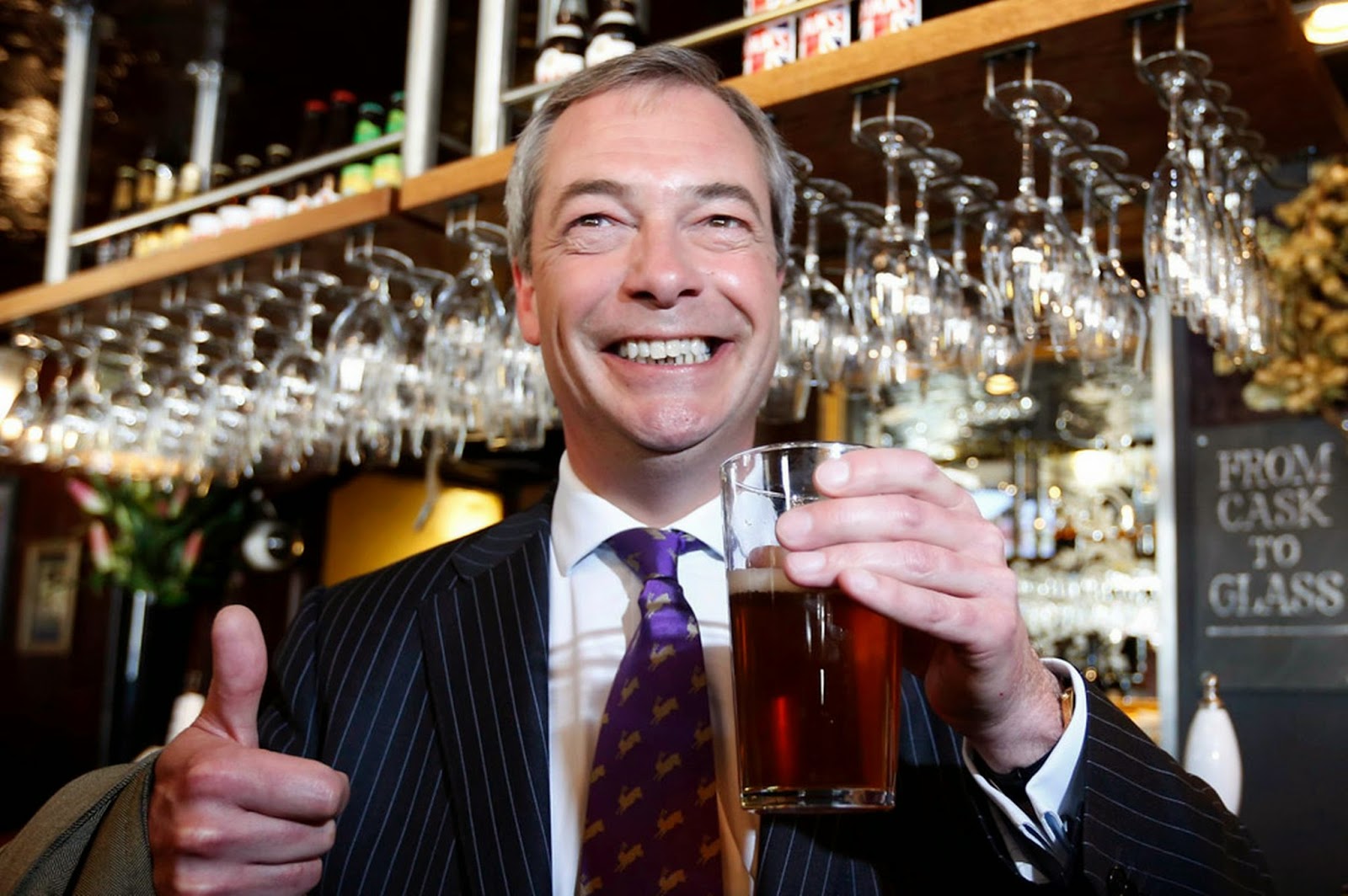 The meteoric rise of UKIP and its charismatic leading man has been an irresistable subject for the British press and its insatiable desire for spectacle. It must be the fag in Nigel's hand, the twinkle in his eye, the mischevious grin, the accent of deepest, darkest Kent... Yet the full picture demonstrates quite well that the key to UKIP's success is in the mainstream.

It was only a few months ago that UKIP candidate Roger Helmer was easily defeated by mainstream candidates. It isn’t insignificant that it took an establishment candidate to secure the Party’s presence in Parliament. Douglas Carswell still stands as the kind of man UKIP sucks up in vast quantities. He stands opposed to universal healthcare and regulations on private enterprise. He wrote the Plan with fellow-traveling libertarian Daniel Hannan. It’s a free-market hymnbook for decentralisation and deregulation.

This is consistent with the reality of Farage’s success. The leap from 13 MEPs to 24 MEPs took five years, but the European elections only draw out 33.8% of the electorate. That’s half of the usual turnout in UK general elections. The entrance points are to be found in the weak spots of the Westminster consensus. Under these conditions the fringe parties can have greater influence.

UKIP gained 27.5% of the vote and outmatched Labour by a little over 2%. So that’s about 9.3% of the electorate. The Conservatives lost 4% of the vote, just as the Lib Dems lost 6% and were overtaken by the Greens at 8%. The vote for the BNP fell by 7%. Against this backdrop, it’s easy to see why UKIP bolstered its vote by over 10%. If you take the local elections, the Farage party lost 5% of the vote, but picked up 160 seats and gained no councils.


See the rest of this article at Souciant.
Posted by Unknown No comments:

To the new Clinton time. 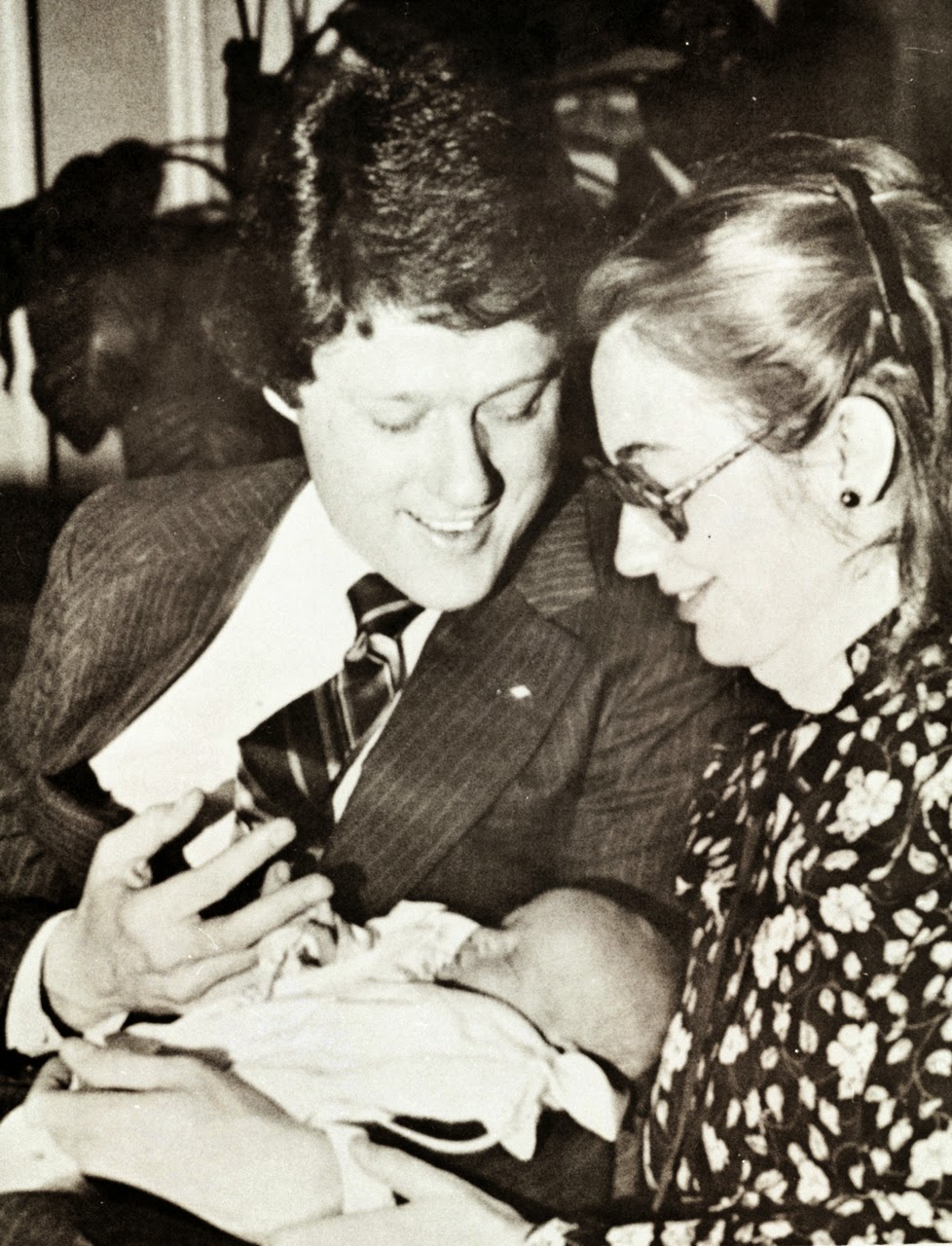 As the race towards 2016 will soon be upon us the Democrat still seem likely to pick Hillary Clinton and no other contender on the Republican side seems to match her for reputation. The Clintons have a record and we should take a look back critically if we are to correctly perceive the next Clinton administration. Here's an excerpt from The Golden Age Is In Us (1995) of a piece written by Alexander Cockburn and Andrew Kopkind.

It's difficult to convey the feel of the Clinton culture. Like the Kennedy culture thirty years ago, it is a stir-fry of blatant self-promotion, unexamined idealism, cynical sophistication, suspect intellectual certainty and an arrogant race and class snobbery that can be oppressive to those without the necessary credentials. It comes on as hip and liberal, but it panders to the right (Clinton's embrace of the death penalty) and abhors any person or movement to its left. It is suffused with a gestural sentimentality about racial harmony, but its commitment is to white privilege. Its adherents protested the Vietnam war, if they were old enough, but they hold no internationalist values and, like Clinton, are ever-willing to sacrifice principle to 'political viability within the system'.


In many ways, Bonnie Greer was right to suggest that there has already been a second Clinton administration under Barack Obama. He has proven to be adept at triangulation as he has presented the Affordable Care Act as a progressive step towards universal coverage. Actually it shares a lot in common with the GOP alternatives to the Clinton proposal of the 1990s. The Obama administration has been even more hawkish than its predecessor as its foreign policy takes the form of reverberations on the Bush doctrine. And Hillary Clinton has played a significant part in it as Secretary of Defense.


We can expect not merely more of the same, but much worse. No end to drone strikes, or the NSA surveillance state, let alone the national security state. The reoccupation of Iraq seems well under way with airstrikes against Syria to boot. Given that she is even more hawkish than Obama and wanted to attack Syria over a year ago. That would have likely put ISIS in an even stronger position than they are in today. What more should we expect from the Democratic Party?
Posted by Unknown 1 comment:


I just read a report in The Guardian on a recent suicide bombing in the town of Beiji just north of Baghdad. The perpetrator was Kabir Ahmed, a British citizen from Derby - where I'm also from. The report details the impact: "The blast killed Lieutenant General Faisal Malik Zamel, who was inspecting forces in the town, and seven other police officers, while wounding 15 people, hospital staff and police officers." It wasn't all too surprising. I often wonder about the extent of alienation in the British Muslim community.

At the same time, there were car bombs in Baghdad and Ramadi which killed 12 people. So we should remain aware that we are only interested in a British death and its significance. We are always overly fixated on our own, even if we count our own among the enemy. I can't help but feel the need to comment when I read of the bombing. It reminds me of the Tel Aviv bomber Omar Sharif, who went to Bemrose as I did, albeit years earlier, and lived in Normanton - the city's Asian district, known in racist terms as a 'ghetto'. My mum recalls the area being described as the Black Hole of Calcutta and my own memory is littered with instances of racial tensions between white and Asian people. My first encounter with racism was in the playground of Becket.

I do wonder about the role of such communal tensions in the radicalisation of young British Muslims. From what I've seen I suspect disaffection with British society plays a role, but it's not a matter of a clash of cultures. There are a wide array of factors I would take into account. The English North and the Midlands have suffered economic deprivation for more than three decades now. On top of that there is the element of racism, as well as political disillusionment (which is also behind the rise of the Far-Right in the UK too) and a shift towards anti-politics. Religion stands as an alternative under such conditions. It's an identity-marker and it holds out hope of salvation by transcendence of the present situation. Tragically, it won't be taken seriously...

This latest incident comes after the US confirmed a series of air strikes against the Islamic State leadership. The US has been engaged against Syrian targets for quite some time now and its campaign in Iraq has found allies in Europe more than willing to join them. So far it seems that these airstrikes can be regarded as part of US efforts to maintain regional instability and, by extension, keep its hand on the global oil spigot.
Posted by Unknown No comments:

It is no coincidence that the decline of the Left as an organising force has been followed by various forms of depoliticisation. It has come in the form of moralism as well as in the culturalisation of politics. Not only class, but race, gender, and sexuality, have been reduced to ethical and cultural questions. It’s a kind of ‘lifestyle’ politics, not even identity politics. As if all we have to do is change our personal conduct and private attitudes then the system will be rendered humane. It’s all a matter of self-regulation, chiefly in language.

If we take privilege-checking, it’s about who has the legitimacy to talk first and foremost. The demand to ‘check your privilege’ will be thrown at anyone for a multitude of reasons. If you fall into an intersection of privileged groups then you can find yourself on the receiving end of this demand. Of course, there is a serious point worth considering. People ought to reflect upon the advantaged position in which they were born and act responsibly. But that’s not what we’re talking about.

No-platforming is not so far away from ‘calling out’ someone on their privilege. Not only is privilege-checking sanctimonious and censorious, it is essentially reformist in its ad hominem attacks. If we take it seriously then its aim is to delegitimize the voices of the privileged and empower those who are underprivileged. So it’s about shifting the discourse, but not very far from what we have already. It’s perfectly conceivable that there are figures who can speak without the baggage of ‘privilege’. It doesn’t make them automatic allies of the Left.

It’s not really about resolving social problems. It’s about reshaping the discourse at best. It smacks of the kind of regulatory measures preferred by liberals. If we can vet the speakers on the basis of privilege then we’ll have a better discourse. It loses sight of the possibility that there is a structural problem with the kind of society in which we live. It’s not enough to challenge privilege and demand that it limits its reach. It won’t go away overnight. It’s the modesty of these aims which the Left should criticise.

If we are radicals then we don’t want to keep privilege in check because we don’t think such privileges should exist. Therefore we are for the abolition of privilege and not the maintenance of such privilege in any way. This calls for more than ‘shouting down’ illegitimate voices. It takes collective action, which requires coordination. The question of organisational form still hangs over the Left long after the Soviet Union collapsed. Perhaps it is the face of this question that the Left would rather turn towards moralism.

This article was originally posted at the Third Estate on November 2 2014.
Posted by Unknown No comments: