The Tyranny of the Individual. 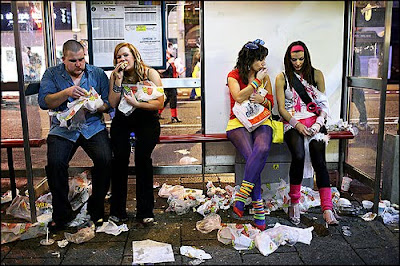 In JS Mill's 1859 piece On Liberty, which is essential reading for any liberal today,  Mill presents and explores the concept of the "tyranny of the majority". The gist of this concept is that democratic procedures can lead to tyranny over minorities, who disagree with the majority but cannot oppose them as they lack the sufficient voting power. As a concept, the "tyranny of the majority" reflects the individualistic tendency of Classical Liberalism. To liberals of Mill's ilk, it is the rights and freedoms of the individual that face potential threats from society, as a collective, in a democracy. The concept itself predates On Liberty and was probably borrowed from Alexis de Tocqueville's Democracy in America, which Mill reviewed. Though, de Tocqueville called it by another name, the despotism of the majority. Regardless, it remains a popular concept with right-wing intellectuals, the Objectivist philosophy of Ayn Rand and her followers being a typical example. Whereas, the majority of liberals today, who are social democrats or at least have social democratic leanings, are not so fond of the concept.

Mostly due to the Chicago School of Economics as well as the Austrian School, who have influenced right-wing politics in the West, there has been a resurgence of Classical Liberal ideas. Though, the return of laissez-faire politique over the last 30 years has been in relation to the global economy and has come in the form of neoliberalism. Even as Thatcher and Reagan "rolled back" the state and "liberated" the markets they still kept to "moralising" social policies that restricted gay rights. These reactionary social policies clashed with the permissive economic theories they preached. The economic theories that came out of the Chicago School and the Austrian School were laissez-faire - in the sense of libertarian and even anarcho-capitalist in some cases - in content. These theories were characterised by an overwhelming trust in private-power and distrust of state-power. But within these theories there is also a deeply cynical view of human nature, that we are fundamentally selfish and ego-driven creatures. This is why the trust of private-power only makes sense if one assumes that private vices reap public benefits. It's easy to see how such a permissive attitude to economics can clash with the repressive vision of a "good way" to live.

This assumption originates in Bernard Mandeville's The Fable of the Bees, in which he argues that private vices reap public benefits in the sense that even a libertine's indulgent behaviour has the potential to employ tailors, servants, perfumers, cooks and prostitutes. The spending of these individuals in turn employs more people like bakers and carpenters. In this sense, private vices are publicly beneficial as a whole. Though, JS Mill's writings on the economy became more left-wing, than anything Chicago School ever produced, it was On Liberty that would be his most influential work. Nevertheless, this assumption has been combined with the simple idea of individual liberty, as laid out by JS Mill, without any regard of the corrosive effects on society. The idea that we can all contribute to society by living life to the full, while at the same time assuming that the market functions best when left to it's own devices, is naive. For one thing, it fails to take into account externalities, which is when the true cost of an act is left for others to pay for. Like pollution, the true cost is being externalised for our descendents to pay for.


Thus, the ideal of individual freedom, of the untrammeled variety pursued by Friedman and Hayek, may be more suitable to an environment of isolation and desperation. A desert island, perhaps, on which one man is stranded and has to fend for himself. He must pursue his own self-interest in order to survive against all odds, the perils posed by the local wildlife and the forces of 'Mother Nature'. It is imperative that he build something that can shelter him, he must also find food and drinkable water. There is no nanny state to coddle him and no society for him to consider. His needs are the only needs that matter and his desires are the only desires that matter. Under these circumstances, greed is good and the alternative may mean death. But Western civilisation is not a network of isolated islands with desperate individuals stranded on them. We all know, our civilisation is more than that. It is an collection of complex and diverse societies, in which there is an intermingling of individual wants and desires. Worryingly, this may mean that the most primal view of humanity may rest at the centre of neoliberal ideology. 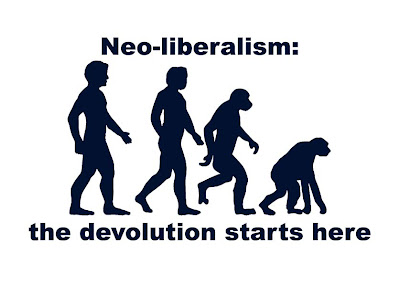 There is a tendency in liberal thought to view society as a mass of atoms, an arrangement between individuals, all of which are pursuing their own separate needs and wants. This is ignorant of the importance of society and that individuals play roles in society. Society is not subject to the whims of individuals, it is made up of individuals that interact with one another constantly. Since all actions concern oneself and others in society, it seems far too simplistic to view individual liberty as the paramount ideal of our civilisation. According to the concept the "tyranny of the majority", this ideal should even be placed above the ideal of democracy in our civilisation. Because democracy may threaten the freedom of the individual it should be restricted, so that democracy is extended to the things that don't really matter. Milton Friedman once lambasted democracy with a "straw man", in which 49% of the population are shot just because 51% of the population voted for it, to support his argument that individual freedom ought to be put above liberal democracy. Though, there appears to be something more being said here.

It could be that the concept presented in Mill's work is a "straw man" argument, used to attack what could be influenced through democratic procedures e.g. private property. We would all agree that Mill is right to argue democracy should not be extended to the personal tastes of individuals, a point he made using the example of the banning of pork in Islamic states, or the lives of individuals as Friedman argued. But these are ridiculous points, as no rational human being would extend democracy to such vital aspects of human life. Even with the example of banning pork, politicians may enact legislation to outlaw certain products and services, but they are usually not acting as representative of the majority of people in society. So it does seem logical, that the "tyranny of the majority" is really about protecting the wealthy minority from the kind of policies the poor majority would enact. Of course, this refers to the redistribution of wealth and the construction of the welfare state, which would benefit the poor majority. In this sense, the individual liberty that Mill and de Tocqueville wrote of is a bourgeois freedom - conceived of for the wealthy few.


This individual freedom, that liberals have fixated upon for centuries, could also be referred to as negative liberty. As negative liberty is the freedom of the individual from constraint, to live and act as one chooses. Though, liberals would propose the limits of negative freedom should be at the harm of others. It is this robust freedom for the individual, including a variety of rights such as the right to private property and the right to vote, which has made liberalism a prevalent political philosophy today. But it could be that this is an outdated political philosophy that panders to bourgeois needs, such as the right to private property, and is based on a atomistic and primal vision of mankind. In it's place, what may be needed is a positive liberty that encompasses the values equality and solidarity within society, as well as leaving room for the freedom of the individual on a social level. This would involve constraining the destructive capacities of individual freedom, which may lead to massive inequality and environmental disaster, while leaving room for the individual to live autonomously.
Posted by Unknown

I've been following your blog for a week or so and must admit that, while I don't necessarily agree with all that you write, you make some very fascinating points.

I would suggest that you take perhaps a more objective tone if you wish to sound more convincing and check your spelling. Writing on Word would help this.

I've corrected the mistakes, that you were referring to. Though, I can't use Word to write these articles as blogspot won't save any articles in which information has been copied and pasted. It's probably to prevent plagiarism. Frankly, the last couple of articles I posted here were written in a polemical style. Though, I shall make a note of your suggestion.

Thanks for reading Mirko.