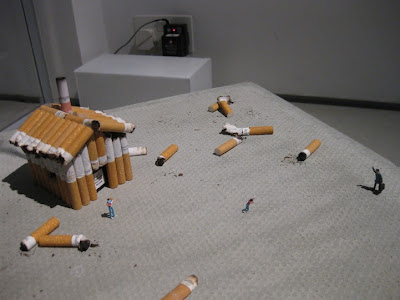 I am one of the generation deemed scum by so many newspapers and reactionary fuck-pigs. It is a generation raised by women without the hand of a man to slap them around and all the while these women - designated simply as 'single mums' - are faced with a torrent of misogyny and bad faith from a narrative of the gutters. Incidentally the attitude of many single-mothers is not one of entitlement, but of guilt, shame and self-loathing. The narrative of the right-wing media has been that the person on benefits is a parasite on the successful and hard-working, that the families which survive on the crumbs of the state are the froth of the scum which has been amassed at the very bottom of society. These people choose not to work in order to get a free ride on the backs of 'real' workers. Notice there is no mention of the severe lack of jobs in our society, the lack of opportunities, the pervasive inequality and the absence of any policy to create jobs.

One major cultural change which has been accomplished by the Feminist movement of the 1970s is the sense that women have a lot to be angry about and should be angry. We live in a time of the 'token woman' and the widespread dissemination of feminist ideas, at least at the level of a kind of Barbie Doll feminism, whilst the conditions of women's lives worsen and everywhere there seems to be a backlash against the steps forward made in the past. The women who have to raise children on benefits are often treated with scorn and even from working-class people, who are jeered on by middle-class journalists and newspaper editors. The explicit attitude of the gutter press to women is anti-feminist, it is almost as if woman is the guilt of man realised and only if he can cleanse himself of his "dirty desires" can woman cease to exist. We have only to glance at these papers to catch the orgy of misogyny in full motion, where a life on benefits is a 'choice' undertaken by the exploding numbers of women who don't think being a housewife is "rewarding".

The fact that the media is a business for which the aim is to maximise profit by driving down costs and stimulating advertising revenue. Let alone that the media is dominated by middle-class white men and has been for decades. The superfluous population are a cost to be minimised. So the press run endless stories about women living in houses worth millions on housing benefit and child-benefit, as if these crumbs are equal to a house in London that they don't even own. Incidentally housing prices have been inflated in London as council housing has been decimated and the economy has been finance-driven. The average age of the single-mum is 37 and 55% of single-mums had their children within marriage. 33% suffer from disabilities and illnesses while 34% of their children are disabled. No wonder there are working-class people cheering on the government as job centres are set a minimum target of chucking three people a week off of benefits. The disabled are a prime target because they won't kick up a fuss. But neither would most single-mums, the attitude pervasive amongst the superfluous population is apathetic parody of the stiff-upper lip.

As David Cameron rants about "runaway dads" he supports policies which make it more costly for women to pursue them for financial support. The blame is still fundamentally pinned on the woman for opening her legs and seducing the man who just can't help himself. Naturally Melanie Phillips responded by fanning the flames of misogyny and tells us that it is not the father who is the problem it is the single-mum who is just trying get by. Even though it will be single-mums who will be hit the hardest by benefit cuts, losing a month's income every year and three times as much as a childless couple. At the same time, single women will lose a little less than a single-parent on benefits due to the tax and welfare changes. Even though around a quarter of children live in single-parent households, and a high number of them do so below the poverty-line. The statistics will tell you that these children will go onto do badly in school, suffer poor health and may even fall into long-term unemployment themselves.

There is an irony in the obscene lies of the Right against single-mothers on benefits. The term "proletariat" is derived from the Latin for "offspring" which refers to those who were too poor to serve the state with anything other than their wombs. Too deprived to contribute to economic life in any other way, these women produced labour power in the form of children. What society demanded from them was not production but reproduction. The proletariat started life among those outside the labour process and not from within it. Though the labour these women endured was a lot more painful than breaking boulders. We live in a world in which the typical proletarian is a woman, as we can see in sweatshops and agricultural labour. After the decline of heavy industry it was women who staffed the huge expansion in shop and clerical work. Even when Britain was the workshop of the world the industrial working-class were outnumbered by domestic servants and agricultural labourers. In other words the majority of the workforce was female in the 19th Century.

The picture we all carry in our heads of the working-class is of the blue-collar brawny male off to toil away in a factory with lunchbox in hand. But the working-class is not defined by manual labour. The working-class includes anyone who is forced to rent their labour power to capital, languishes under its oppressive disciplines and have little control over the means of production. Thus Karl Marx ranked commercial workers along with industrial workers and refused to identify the proletariat with just "productive" workers, in the sense of those workers who churn out commodities in exchange for a wage. The unemployed are not part of a so-called "under-class" but are actually central to the working-class. The way unemployed women in particular are regularly singled out by the reactionary media along the usual misogynistic lines is the essence of class warfare. This is how the important role of child benefit has been jettisoned over the years, it is not even seen as an investment anymore by the elites and the commentariat.
Posted by Unknown