"If the twentieth century was the Freudian century, so that even its worst nightmares were read as (sado-masochistic) vicissitudes of the libido, will the twenty-first be the century of the post-traumatic disengaged subject, whose first emblematic figure, that of the Muselmann, is multiplying in the guise of refugees, terror victims, survivors of natural disasters or of family violence?" - Slavoj Žižek 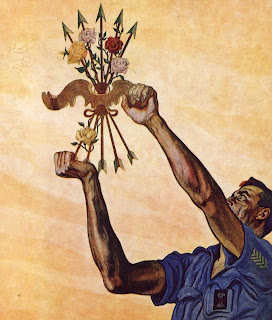 Given the Surrealist circle that Salvador Dalí moved in as an artist it was inevitable that he associated with leftist artists such as Andre Breton, but he was an aberration of a radical art movement as he supported the Fascist regime of Francisco Franco once he returned to Spain after the war. So it was ironic when the Spanish establishment sought to mobilise international praise for Salvador Dalí on the centenary of his birth in 2004. The chosen portrayal of the surrealist was as a "rebel" and an "anti-establishmentarian" who stood up against the tide of art. But this is a misleading portrait of a man who sat on the fence for far too long. It was Picasso who painted Guernica, to some the quintessential painting of the fight against Franco, in opposition to Fascism and in support of the democratic forces in Spain. At the outbreak of the Spanish Civil War it was Dalí who refused to take a side and avoided the fighting. When Breton insinuated Dalí was a National Socialist he responded "I am Hitlerian neither in fact nor intention." In the end he found himself excommunicated from the Surrealist group.


Yet we should remember that the inaction of Salvador Dalí was violent in nature and proved conservative when Franco came out on top, he then proceeded to applaud the brutal repression that followed and congratulated the dictator for "clearing Spain of destructive forces". Dalí went on to send telegrams of praise to Franco as he signed the death warrants of political prisoners. Just before his death Francisco Franco had four more political prisoners executed and Dalí sent him a telegram. He later came out as an admirer of José Antonio Primo de Rivera, the founder of the Falange Espanola. Dalí sought to present himself as a dedicated servant of the Spanish Church, which was still celebrating Queen Isabella for expelling the Jews from Spain and stood behind Hitler in support of the Holocaust every step of the way. Dalí denounced his old friend Luis Buñuel as a Communist and an atheist. He pulled all the strings he could in America to have Buñuel sacked from the Museum of Modern Art, where Buñuel had tried to start a fresh after fleeing from Fascist Iberia. 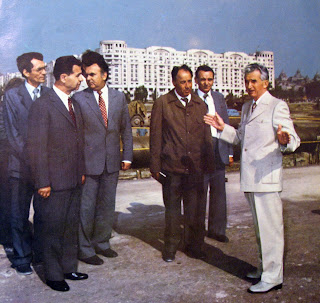 Eventually Dalí had to flee Portlligat when the locals came for him. As the regime crumbled in the aftermath of Franco's death only then did Dalí emerged as an ardent defender of the monarchy. The only other despot to provoke a telegram from Dalí was Nicolae Ceaușescu, who was busily crafting a Kim Il-Sung personality cult around himself and had gone as far as to start carrying a sceptre around with him. The telegram Dalí sent to the Conducător, in which he showers Ceaușescu with praise, was a work of satire. Nevertheless, it was published in the Scînteia as a serious endorsement of the Communist regime. Post-modern irony had yet to penetrate really existing socialism. Before the collapse of Fascism in Spain he had made a point, especially in his visits to the US, to pray for the health of Franco. Dalí never strayed away from publicly announcing his unconditional support for the regime at press conferences and he only "dissented" from the status quo to praise Lorca. We might read deep into the lifelong adoration he had for Lorca as an expression of a yearning to dissent and really all of his support for Fascism were just forms of post-modern irony. I myself find this reading a bit too generous.

The Fascist regime in Spain became a blockage which had festered corruption on a huge scale and would inevitably have to be circumvented by the forces of capital. The marketplace tends towards relativism, plurality and individualism in spite of the fact that it requires a degree of traditionalism, bigotry and cohesion in order to maintain itself. So it undermines the very values which insulate it from revolution, this is true whether it is the moralisms of the Church, the conspiracy theories of nationalists or the syndicalist Third Position. When the socialist acts, the Fascist reacts and in a perverse sense Fascism was never violent enough to obliterate capitalism totally. Instead the promise of Fascism is an alternative modernity in which the class struggle is nonexistent rather society is unified through nationalism against the forces which are a threat to its' greatness. It opted to bring "super-capitalism" from bringing down the nation, in a similar way to social democracy it aimed to buy-out the revolution.

It is clear where Dalí stood, a bourgeois pig wallowing in the sheer decadence of it all. He sold himself to fuel a life of sexual and aesthetic excess, pushing the boundaries of taste further and further. All the while he claimed to be a "good Catholic" and posed as a "loyal citizen" to the state. Dalí could have been so preoccupied with fantasy and art that he found no need to take radicalism beyond the canvas to the streets of Barcelona. The prospect of anarchy was a terrifying one and order was necessary for aesthetic contemplation let alone creation. Dalinian surrealism was constrained to the tabula rasa of the canvas where anything could be expressed freely whilst it was enclosed by an oppressive framework of the state. To accept this we would have to swallow the line that Dalí sustained himself as a whore artiste by fawning over Franco at every turn. If that is the case then Dalí is no different than a Muslim who accepts all the liberal values of Western civilisation. A non-invasive Muslim that we can easily fit into our system of rights and liberties, someone who can be looked at in the same light as a middle-class white person with politically correct thoughts.
What's wrong with this suggestion? If it were simply a case of that then Dalí would have been no less conservative had he lived in the US. The difference is that he would be fawning to a liberal democracy and it's constitution of rights and liberties. It was not the case that Dalí had no other means of survival as Fascism emerged in Europe and reigned on the Iberian Peninsula for 30 more years than Hitler and Mussolini governed. He did not have to just take the sides of the people who murdered Frederico Garcia Lorca, a man Dalí loved. It was not impossible to live as an exile in opposition to the most homicidal ideology in history. The way in which ideology functions is systematic, it is material rather than immaterial and it remains hegemonic if it unchallenged. This is the way that Salvador Dalí lived in Spain as a fixture of the ruling ideology, it is not necessarily that he was a Fascist but it is the case that the inaction he chose was violent in it's complicity with Franco. He wasn't a non-invasive radical, he was complacent and increasingly so as the years past.

It was about money and when it wasn't about that it was about fucking. Even as it all came crashing down Salvador Dalí stood by tradition, specifically the monarchy, and just posed as another kind of conservative. It was the opposite position that he took in the art world where he was "anti-establishment" to the point of sabotaging the supply and demand logic behind the value of his paintings, he  would sign thousands of blank sheets of paper at $100 a pop to saturate the market with forgeries. It was an unabashed act of avarice and exhibitionism as well as a befitting expression of a particular aspect of surrealism. Of course I'm referring to the emphasis on paranoia, we can't even be sure we own a genuine painting by the man or even a copy of such a piece. We might even be tempted to write-off his appearances in adverts for chocolate as "ironic" but we should really just accept that he was a whore artiste of stupendous proportions for a very long time. It is the same lack of scruples which Dalí had demonstrated in his inaction around the Spanish Civil War and the aftermath. Perhaps Orwell was right to say of him "One ought to be able to hold in one's head simultaneously the two facts that Dalí is a good draughtsman and a disgusting human being."
Posted by Unknown

You got great points there, so I always love your blog, it looks like you are an expert in this field. keep up the good work, My friend recommends your blog.