A few words about Dr No. 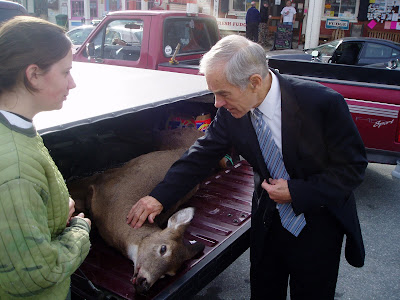 The Principles of Harm.


Once again we find Ron Paul is running for the Presidency as a Republican. The planks in his platform are libertarian in content and populist in form, with a strong isolationist stance on foreign policy which is attractive to less hawk-ish Americans. In the debates between Republican candidates, Ron Paul stood out as a maverick politician as usual and came second to Michele Bachmann in the Iowa poll. Even as the majority of the Republican candidates agreed that there should be a constitutional ban on gay marriage, Paul maintained that the government has no role to play in marriage at all. On foreign policy Paul maintained that the US had no role to play in Afghanistan, Iraq or Libya, whilst he called for significant cuts to the US military. As Ron Paul is appropriately dubbed "Dr No" because of his voting record to oppose any legislation which is opposed to the principles of the US Constitution. At a deeper level this is significant of the brand of libertarianism to which Ron Paul subscribes for it rejects some of the most basic aspects of government and society which we take for granted.

The libertarians who say "No!" to paternalism will reject any legislation which is meant to protect the individual from harming themselves. So the laws which obligate individuals to wear seat-belts in cars and helmets when driving motorcycles can be burned. The people hurt must also pay for their own medical bills, the government has no right to dictate what risks a person can take with their bodies and lives. We might think that it is reckless to ride a motorcycle without a helmet and we know that a helmet law would prevent devastating injuries, we should oppose such laws anyway. We should do so on the grounds that it is a violation of the right of the individual to decide what risks to assume. It might be that a law on this issue is a slippery slope to totalitarianism. Of course, a libertarian may concede such laws from the position that these laws will prevent the harm of others from reckless decisions made by others. But that would presuppose a certain utilitarian leaning which is not always the case for free-market libertarians.

The opposition to paternalism leaves room for Ron Paul to stand in opposition to gay marriage and abortion in that the removal of legislation against such behaviour would in itself function as a form of paternalism - just as the imposition of legislation to ban gay marriage would be a form of paternalism. This is the same reasoning behind much of the libertarian opposition to civil rights legislation in the 1960s. Conveniently Paul can rely on this platform to bring in a portion of the homophobic vote. Effectively the same social constraints which are necessary for an unbridled marketplace emerge in the Ron Paul 'revolution' just as it does in mainstream American conservatism. Opposition to abortion might be justified along libertarian lines by taking the side of the baby over the woman, as in the Harm Principle limits the freedom of the individual to decisions which do not harm other people. This is a contentious issue as it is disputable whether or not a fetus constitutes a person in the same sense as an adult woman does. One of the implications of such an opposition to abortion is that the stance of isolationism may be broken. 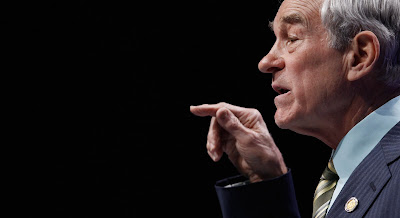 The Politics of "No!"

A libertarian of this kind can also say "No!" to morality legislation in that the coercive force of law should not be used to promote any values at all. Just because the moral convictions expressed are majoritarian in nature does not mean it is automatically right to impose such convictions on everyone. We might object to prostitution morally, but that does not justify legislation which prohibit consenting adults from engaging in it. The same can be said of homosexuality and abortion. Of course, we find that these libertarians had no problem with opposing legislation which might strengthen or defend the rights of minorities. Both Reagan and Goldwater opposed the Civil Rights act on the grounds it violated the rights of the individual and gave too much power to the government. Here we find the liberal framework of rights and freedoms which is parasitic on the beliefs of individuals provides a space for racism to be expressed. The same goes for homophobia, misogyny and anti-Semitism. So we should not be surprised by Ron Paul's meandering racial populism.

The libertarian subscribes to a theory of rights which rules out any law that requires some people to help others, especially taxation for redistribution of income or wealth. The benefits that can be derived from welfare state measures to provide health-care, education and housing come at a cost to the individual. It should not be the role of government to mandate that cost. Charity is the name of the game for libertarians. Progressive taxation is a form of coercion and even theft to some. The state has no right to force affluent tax-payers to support social programmes for the poorest and most vulnerable members of society. The slogan "Tax is theft!" is often bandied about by this crowd. Of course, the suggestion that the sudden removal of welfare provisions in health-care is a form of theft escapes them. A free-market libertarian has no time for needs, wants and merits matter much more. So even though a patient on dialysis could do with one of my healthy kidneys it doesn't mean that they are entitled to my kidney. It's my kidney! The needs of another person cannot be allowed to trump my right to do what I want with my body and what I own.

You may notice a pattern here, these self-proclaimed libertarians are not on the side of a lot of people in society and certainly never on the side of the under-dog. The closest a free-marketeer like Ron Paul can get to the common man is to appeal to the prejudices of the American working-classes. There is no serious attempt to represent the interests of working-people at all. That's probably because it is up to working-class people to pursue their own interests as obedient atoms of consumption and the cogs kept turning for the extraction of surplus value. This is not the time for market liberalism, when BP has ruined an entire ocean and Wall Street has tore the US apart at the joints like a chicken.  Ron Paul's America would be one in which federal power is decentralised for the benefit of business while blacks sit at segregated tables in canteens, women die in back-alley abortions and poor people drop like flies from curable diseases on street corners. Meanwhile the state would be there to function only as a security apparatus in the defence of the borders and the incarceration of the population superfluous to the economy.
Posted by Unknown

Not much of a leader if you can't lead, hey?